Early 20th Century American composer whose often highly dissonant music displays a panoply of “advanced” techniques including tone clusters, quarter tones, polytonality, polyrhythms, etc. Often Ives creates “soundscapes” of selected people, places, events, during the post-civil war era and early 20th century in America—historical “Americana” in musical form, often with a lively sense of humor. The dissonance is not so much strident or angry, but more an attempt to portray the outside world “as it is” expressive of the natural, inadvertent conflicts of daily life. Ives also innovated using multiple musical “layers” each moving at different tempi simultaneously. For instance, in the The Unanswered Question there are three distinct layers:

A) Full string ensemble: forms a “base” layer  of diatonic “church” chords representing a “heavenly” choir over which there is a “call and response” between the solo trumpet and upper woodwinds.

Most importantly, though, Ives regularly incorporates American popular songs, patriotic songs, marches, hymns, spirituals, etc. as a basis of his style. Often, these melodies and tunes are used as subjects of a unique kind of musical “commentary” reflecting a philosophical view influenced by Emerson, Thoreau, and his bandmaster father, George Ives.

Selected works include: The Unanswered Question, 3 Places in New England, Symphony No.2, and Concord Sonata (Piano Sonata No.2).

Newly appointed Quartet-in-Residence at Penn State Abington, will present their debut on-campus performance, free to the public, Wednesday, April 5, 7:30 pm in the Sutherland Hall Auditorium. The diverse program includes both classical and light musical selections, ranging from 1930’s Russia to contemporary times, spanning from Argentina to the United States.

A special presentation by Russian scholar, Dr. Roy Robson, Dean of Arts and Humanities, will precede the Shostakovich String Quartet No.1 with his introductory remarks of Russia in the time of Shostakovich. The program also includes the prelude of Dr. Nocella’s opera-in-progress, Grynszpan, the backstory of Krystallnacht, George Gershwin’s jazz infused Three Preludes, arranged for quartet by Dr. Nocella, first performed by the composer on piano in 1926 in New York City at the Roosevelt Hotel. Nocella’s lively Ninth Street Festival Overture, reflecting his South Philadelphia roots, and the sultry, passionate Libertango by Argentinian composer, Astor Piazzolla complete the program. 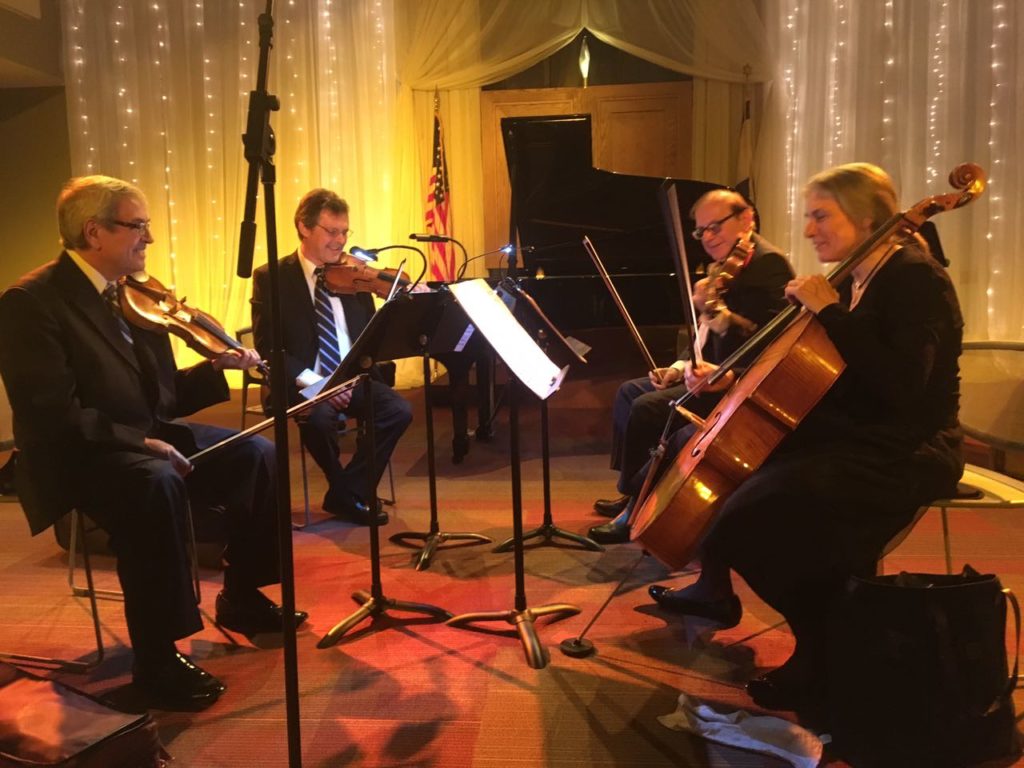 Missa Brevis, which premiered in 2000 for Pope John Paul II at the Vatican, will be reprised at Nazareth Academy Chapel in North East Philadelphia. A moving choral tribute to eleven courageous nuns who sacrificed their lives to save a Polish town from Nazi annihilation during WWII, this is a poignant and inspiring commissioned choral piece. At its original performance at the Vatican, Missa Brevis, was part of the beatification ceremony in Rome in 2000 celebrating these eleven brave women. Tragic but also uplifting, the piece was again performed in 2000 at a second venue in Rome, then toured in Venice and Florence, and finally, in Baltimore, and Philadelphia.